Among the pollution that is most common in pipelines, it is worth mentioning the paraffin deposits. They lead to a reduction in the flow area of the pipe and even to a complete blockage of the pipeline. Paraffin deposits are due to the cooling of the transported oil, as well as due to its physicochemical properties, pressure drops inherent in the pumping process, and the physical process of paraffin precipitation from petroleum products. In a typical situation, there is an uneven distribution of paraffin on the inner walls of the pipeline and its accumulation in the upper segment. This is due to the lower temperature of these areas. Paraffin deposits do not remain in the lower areas due to mechanical impurities, which literally strip off the impurities in its path. 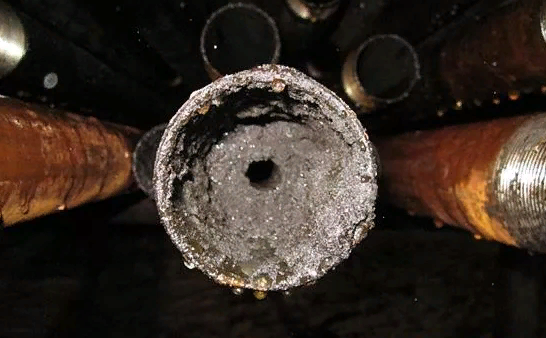 In order not to engage in forced premature cleaning, it should be remembered about the implementation of preventive measures that will maintain the capacity of pipelines. We are talking about such preventive measures as the annual cleaning of tanks from oil residues, which consists in: heat treatment of highly paraffin types of oil (heating and cooling to a certain temperature), mixing pumped types of oil and low-paraffin or low-viscosity types, mechanical mixing or introduction of special additives that promote increase in oil fluidity.

Cleaning of internal surfaces of the pipeline

The operation of oil pipelines is accompanied by the use of the following methods for cleaning its internal surfaces from deposits: thermal, chemical and mechanical. These methods can be used separately or in combination. The essence of the thermal method of cleaning oil pipelines is to flush the pipeline with the help of coolant – hot oil or steam with hot water. This method is used in those areas that have a small diameter or small length of pipelines. The principle of the chemical cleaning method is to use some kind of washing solution. The most effective are those solutions that contain some part of surfactants. We are talking about different classes of organic compounds, differing in special physicochemical properties. Even with a relatively small amount, they can lead to changes in the properties of surfaces and phase boundaries in the system containing them.

The principle of the impact of detergents lies in its greater adsorption on the surface of contaminants in comparison with particles of dirt and paraffin, which leads to the displacement of the latter. To prevent the problems associated with secondary sedimentation on the surfaces of the tubes of particles separated from the surface, and its coarsening, high molecular weight dispersants should be used. They contribute to the formation of protective polymolecular films surrounding the particles, ensuring its removal in the composition of the liquid.

It is not possible to get rid of mechanical impurities (sand, clay, rust) and larger objects (stones, metal pieces), which, while remaining in the pipeline, lead to a decrease in its throughput.

It is not always possible to provide 100% cleaning in a safe way, if work on mechanical cleaning in the pipeline is carried out.

A more reliable method of chemical cleaning is considered to be cleaning by means of an artificially created plug in which the reagent is located.

The cleaning procedure consists of the following steps:

Due to this procedure, it is possible to achieve: